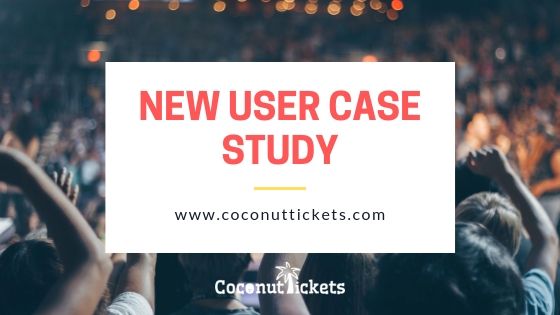 Not everyone that puts on an event is a professional event manager. We aim to help anyone sell event tickets regardless of their experience.

A new user, James Bassey, wrote about his experience of first choosing and then using Coconut Tickets for his latest event.

My Experience using Coconut Tickets for the first time

So I was planning a concert and I needed a good platform where people could register, we could sell tickets and also reach out to prospective vendors. Someone suggested Coconut Tickets to me but I was a bit reluctant because I had never heard of it.

Before then, I had tried using Eventbrite and one other platform like that for an event I was organising but I did not quite like them as much. There were just too many things I did not understand about them. I am not a professional event planner. I only get to organise events once in a while. So, I am not used to many of the terms on many of these event websites.

One thing that I found really cool about Coconut Tickets was the fact that I did not have to pay anything from the beginning. So, I was not locked in. I was able to set up an event and sell tickets for about 30 days, during the free trial. I found this very cool, as I had the option of backing out if I didn’t like the platform as a whole.

Also, the fact that the site did not charge a commission off my ticket sales is really good too. They asked for just a monthly fee and that was all. In the past when using other platforms, I have had to mark-up my ticket prices to be able to cover the commissions that the event ticketing platform takes from sales. But in this case, it was just a flat fee, based on the amount of tickets I wanted to sell.

I liked the fact that I could pitch to vendors and people I wanted to come and sell at my event, directly from the site. I also liked the fact that I could create a different landing page for them; one that sees the vendors, speaks directly to them and sells the event to them, rather than just having the same page for visitors and vendors to land on.

I found the whole Coconut Tickets events landing page and event management platform very customisable. You can make your own decisions as to things like the fonts, the layout of your event landing page and you can also insert your own terms and conditions. However, for someone like me who is not a professional event organiser, all those things did not really matter so much. All I wanted was for my event to be live and to get the tickets selling fast. But the fact that I knew I could customise almost anything I wanted was really nice.

Though the truth is that, like most other event ticketing platforms, the Coconut Ticket platform speaks mainly to event planners. But it also does well in catering for someone like me who is still a novice in event management. The website at every point has something like a toggle that when clicked explains just about anything that might seem confusing on the site. This is a very big plus.

As to the customer service, I would be lying if I said it was anything short of amaziiiing. There is a chat box just down on the right side of the website where you can type in any issues you might be having or things you don’t really understand. The response is pretty quick. Just within a few minutes, I got responses from the customer service team and this was very important for me.

On the part of the customers registering for the event, I asked around and the responses I got was surprisingly positive all through. Most of them really loved the fact that, unlike Eventbrite and most other ticketing platforms, they did not have to create an account with Coconut Tickets, create a profile and do all those things before being able to register for the event.

Once customers put in their names, emails and a few other details, the registration was done. I totally love the fact that on Coconut Tickets, you can register for an event within just 3 minutes or less. Also on the part of the event organiser, you can get your event set up, with tickets and QR Codes live and running in 10 minutes or less.

Visually, some of the competitor platforms did look better. Though the design is not that bad, it did not look as professional and inviting as some of the others. I was first reluctant when I came on it. But then, I took the plunge and I did not regret it.

I definitely wouldn’t have problems recommending Coconut Tickets to anyone who wants to organise an event at this time. It is super cheap, it is really easy to use and the customer service is just amaziiing!

James Bassey is a full-time student in Johannesburg, South Africa who is very passionate about entertainment. He organises events for students and young people at his college.

Click here to find out more about Coconut Tickets and start your free trial.